Want to find the new stuff on Knitting-and.com, or read about my latest projects and discoveries? This is the place.

I have to go to the maternity day clinic tomorrow so I thought I’d post the rest of the baby stuff that I made, just in case they make me stay. I have borderline hypertension, nothing serious, they just want to know if it fluctuates wildly in a single day or if it’s more of a week by week thing. It’s been perfect for the last 6-8 weeks, but was borderline on Friday and when I first saw the doctor 18 weeks ago so they want to know if it could have been high on days that I wasn’t at the clinic.

I’ll be taking some knitting of course (I hope they let me knit while attached to all those gadgets), and I’ll be making some ballband washcloths.

I’ll show the projects roughly in the order that I finished them. Because I don’t want to spend 10 hours writing a post like I did with the toys, I’ll link each project to my ravelry page so that you can see my notes on any changes that I made, which yarns I used etc.

Presto Chango, a free online pattern. The original has very pretty lace panels on the front but I left the lace off because I didn’t think it would work well with such a colourful yarn. 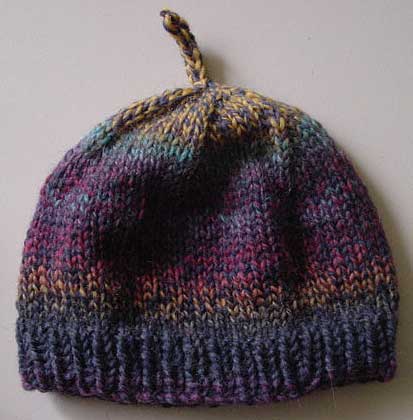 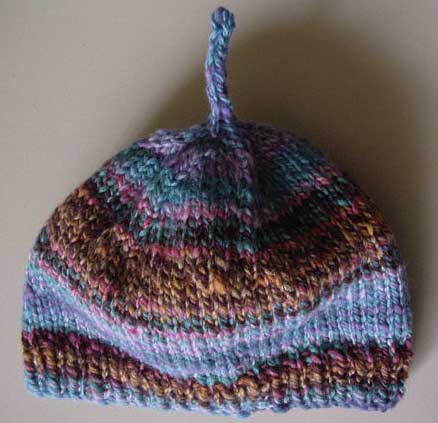 February Baby Cardigan from Elizabeth Zimmermann’s Knitter’s Almanac. I left out the lace to make it a more all-purpose jacket for very cold days 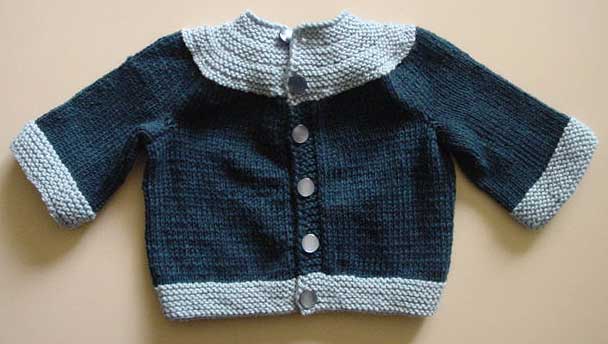 Baby Surprise Jacket from The Opinionated Knitter, also by Elizabeth Zimmermann (you may start to notice a trend here)

I made a lot of size modifications to this vest so that it would fit baby-in-progress during the cold weather. 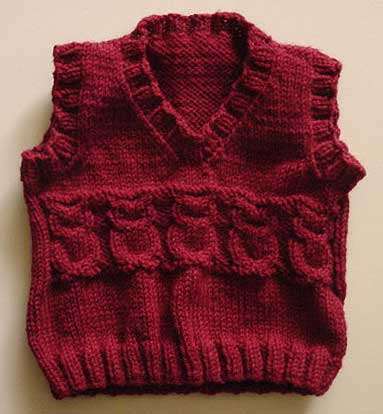 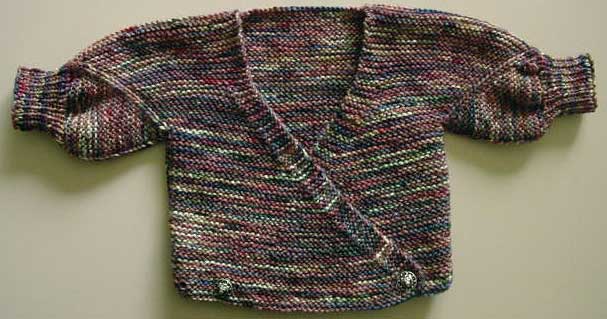 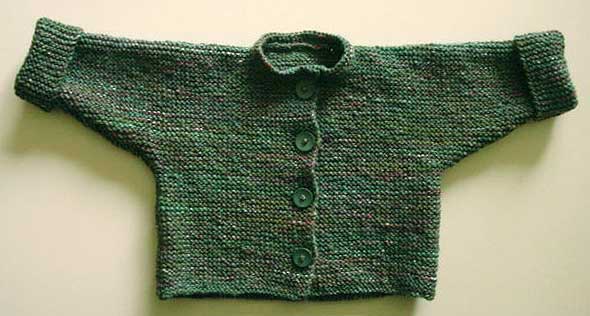 A closeup of the handspun yarn: 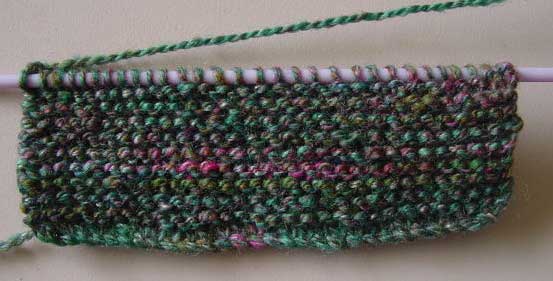 The next two hats are from my The Any Yarn, Any Size Knit Hat Book 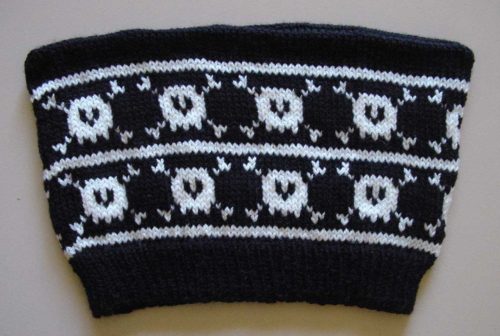 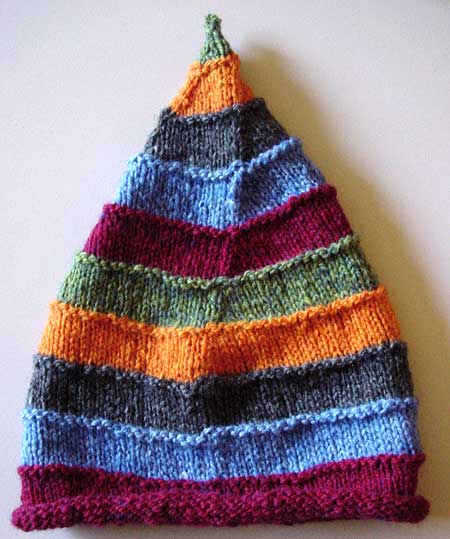 and that’s it for all the baby knitting so far!

If I’m not admitted tomorrow (I doubt that I will be), I’ll show you the receiving blankets and bibs that I have sewn and tell you all about the rest of the projects that I want to get done before the baby’s born. I am nothing if not ambitious in my crafting 😉

I’m not a sock knitter. I have knit socks. Bed socks, day socks, all sorts of socks but I don’t like making them. 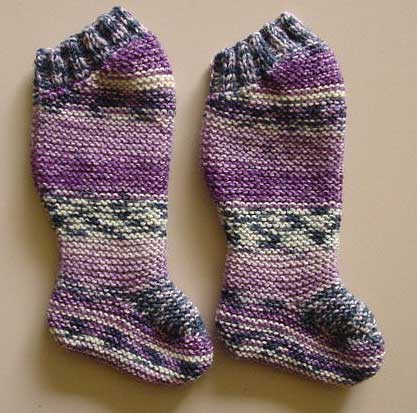 These are the shaped baby knee socks from Homespun Handknit’s “Bouncing Baby Set”. I love making these socks so baby-in-progress ended up with two pair 🙂

The blue pair are made from a Japanese (possibly Chinese, I don’t know because I lost the labels) yarn that I bought at the op shop many years ago, while the purple pair are Opal sock yarn. I’ve made an awful lot of things from that one skein of Opal sock yarn. Baby socks, a woven scarf and a pair of fingerless mitts plus there’s still enough left over for a baby hat or something small.

These, however, are not socks! 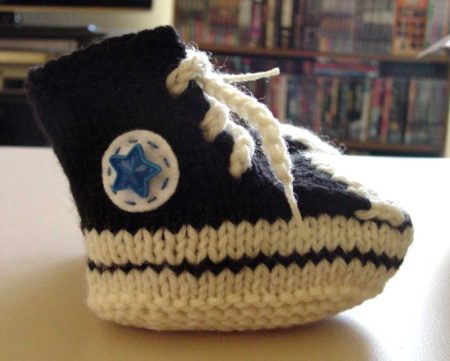 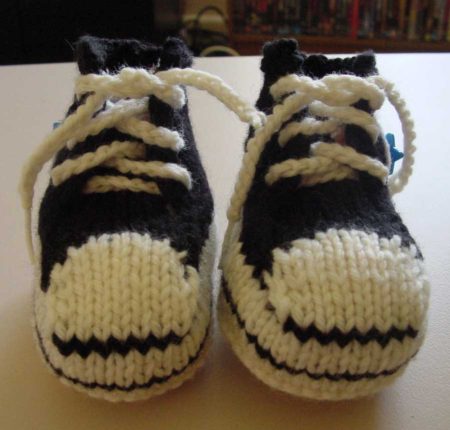 Converse baby booties! I figured if I couldn’t make pretty girly things then I would have to go for cool 🙂 Did I mention baby-in-progress is a boy?

Yeah I know, purple stripy knee socks aren’t very cool but I had to find some use for the only skein of actual sock yarn in my stash 😛

These booties are made from Cascade 220. Yes, the handwash only stuff. I have copped a fair bit of flack from people when they find out that I have knit all my baby’s gear from handwash only yarns but in all honesty, I don’t understand what’s so difficult about hand washing them. You throw them in a bucket of room temperature water with a bit of woolwash for half an hour, spin out the water in the washing machine and lay them out to dry somewhere. Baby stuff is so small and light you can hang them up without worrying about them getting all misshapen. Anyway, that’s what I did with my first baby and what I plan to do with this one.

Anyway, a short post today because I started writing this at 5-something am (boo to insomnia and large baby-bumps that keep you awake) and I’m tired so I’m going back to bed.

BTW, I washed that sorry looking blanket from yesterday’s post and I think it will have to be patched with many crocheted squares and rectangles instead of hearts because there are just too many holes in it (and not the good granny square kind of hole). I’ll save the hearts for the blanket that I didn’t show, which only has one hole in it so far 😛

Crafting for Teens and Babies

Apologies for my continuing absence. I’ve been napping a lot in between crafting, visiting the midwives clinic and having all those fun (not) tests that are inflicted upon pregnant women.

Speaking of crafting, since that’s what you’re here for, I thought I’d write a few posts about what I have been making for my 15 year old daughter and son-in-progress. I’ll post all out of order and start with the things I have made for my daughter.

First of all is the Texture Shawl Collar Jacket from Patons Australia, booklet #1264, Inca Fashion Knits. I actually received the pattern as a freebee from Stitches magazine so I don’t have the whole booklet.

It looks quite baggy in this photo but in reality it fits very well. Slouchy teens, what can you do 😉

I really enjoyed knitting this jacket. The stitch pattern is easy to remember but changes enough to keep it interesting and it works up really fast. I really like the Patons pattern books as Brittany likes many of the designs and many them are written in sizes small enough for her.

I knit the small size and made the whole thing 4.5cm shorter because Brit is so tiny (for our family, lol) and used 2.5 balls of yarn less because of the shortening.

I would keep this particular yarn for special garments. It’s loosely spun so it wouldn’t stand up to a lot of wear and tear, but for a special garment I find it really nice and would definitely use it again. The buttons are (I assume lasercut) coconut shell which I bought at Spotlight for $5 each. Actually, the hardest part of this jacket was finding the buttons!

Next up is a Hello Kitty Mini-Tote that I crocheted for Brittany’s birthday last week. 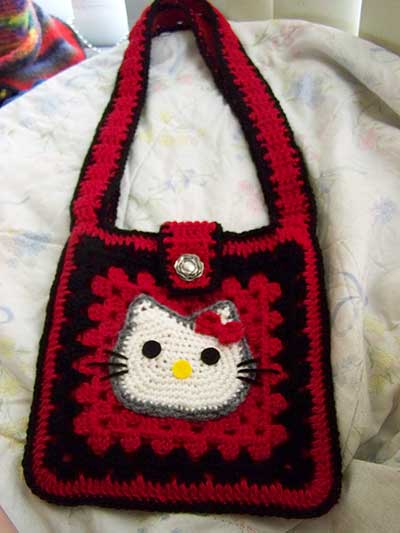 I used the face pattern from a backpack and made two granny squares for the purse section. It’s made from Cleckheaton Country 8 ply (dk weight) wool and lined with some red cotton. The eyes are felt stuck on with washable craft glue. I’ve been crafting from patterns a lot lately and it was nice to make up a pattern on the fly for a change.

Speaking of things that are different, this is Gary the evil sock monkey. 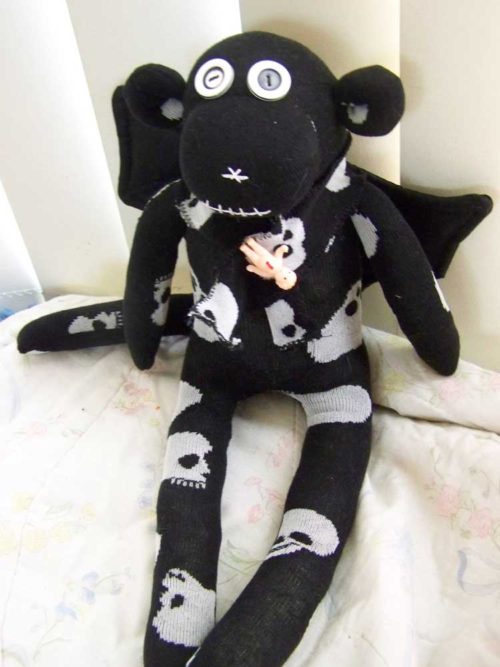 and back (so you can see his wings):

Gary is a basic sock monkey with quilted wings.

To make the wings I drew a basic wing shape on a piece of paper. Then I cut 2 out of black homespun cotton and one from a medium weight quilt batting.

I stitched the batting and fabric together with the two layers of fabric on the bottom and batting on top, leaving a gap for turning. I then trimmed the batting from the seam allowance, turned it right side out and hand stitched the gap closed. Finally I finished off by stitching the triangles inside the wings to create the detail. It’s a lot easier than it sounds, I swear 🙂

Of course all evil flying sock monkeys need a best friend, so when I saw this pattern featured on the Craft: magazine blog, I had to make one!

That’s all of my crafting for teens at the moment. Tomorrow: baby blankets!

If you’re not in any of the Aussie groups on Ravlery you may be wondering where the hell I’ve been.

Watch this space for a whole slew of baby knitting over the next 26 weeks, plus a few things I’m knitting for Blob the first (now known as Miss Brittany and soon to be 15 years old)!

How to make a rag rug

I don’t usually put tutorials straight in the blog but I couldn’t wait to finish my rug to show you this!

About 6 months ago I saw some vintage rag rug looms on ebay. Postage from the US to Australia was prohibitive because they were so heavy, so I copied down the measurements in the description and my Dad made me one. 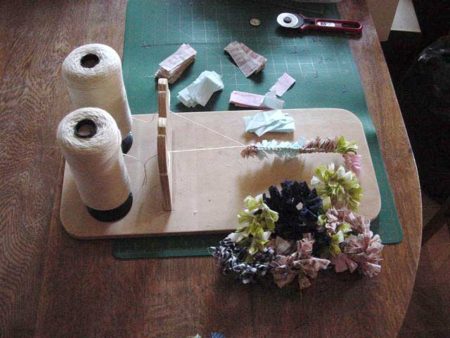 It’s about 20 inches long with a cup hook at the front for tensioning the warp, two posts at the back for sitting your spools of warp on, and a perpendicular piece of wood with two slits in it for keeping the warp tensioned and at an angle so you can get your hands underneath for speedy knot tying (for the sake of this tutorial I’m going to call this the “tensioning post”). If you’re a woodworker please feel free to make and sell these. We need to keep the old crafts alive!

Here’s how to make the ghiordes knots. (I have read the ghiordes rhymes with forties, but I’ve never heard anyone say it out loud)! 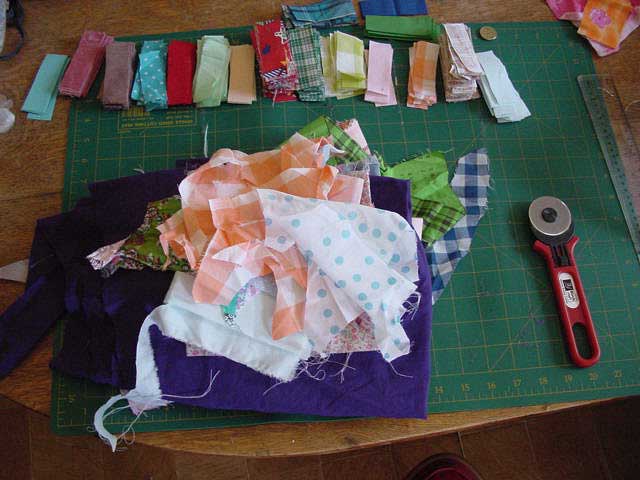 First, cut your strips of fabric. For my first try I have cut them 1 x 3 inches. I’m using fabrics that are mostly cotton that were left over from a Suffolk puff quilt that I made last year. (I’m going to experiment with other fabrics later on). 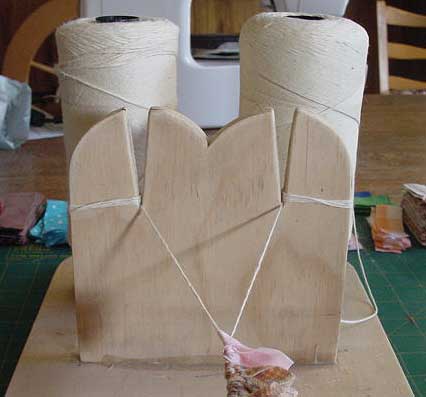 Tie your two warp ends together and put the knot in front of the cup hook. Pull the warp tight, thread it into the slots on the upright bit of wood and make a few loops over the outside edges to keep it tight. 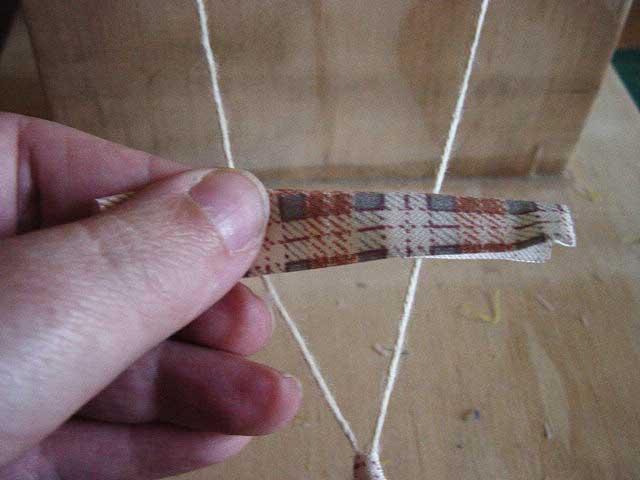 Take one of the strips of fabric and fold it in half lengthwise. Hold it across the top of the warp. (I usually make knots with two hands but one hand was holding the camera). 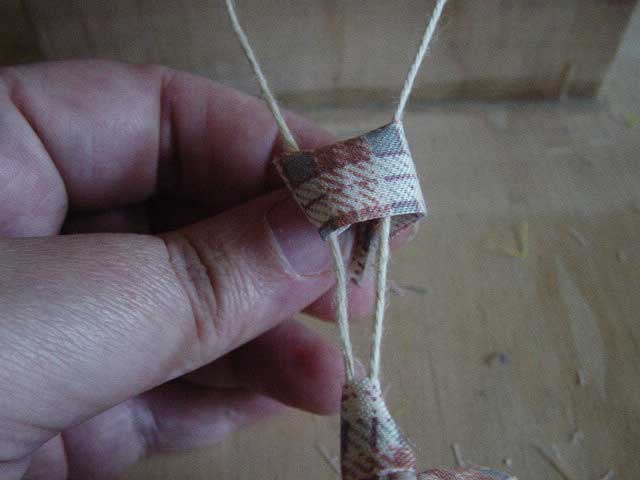 Fold the ends to the back, around the warp threads. 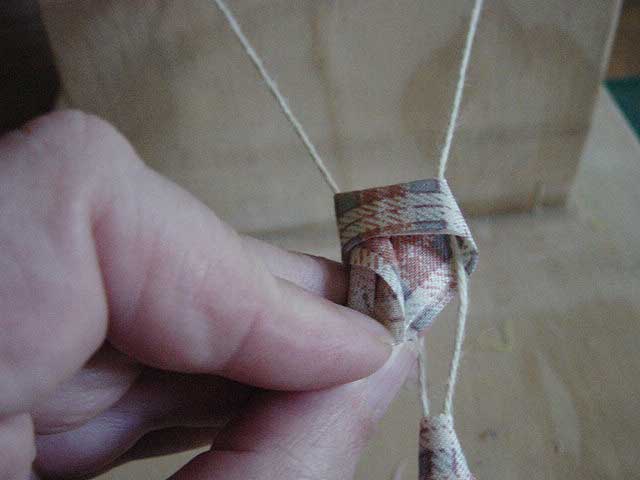 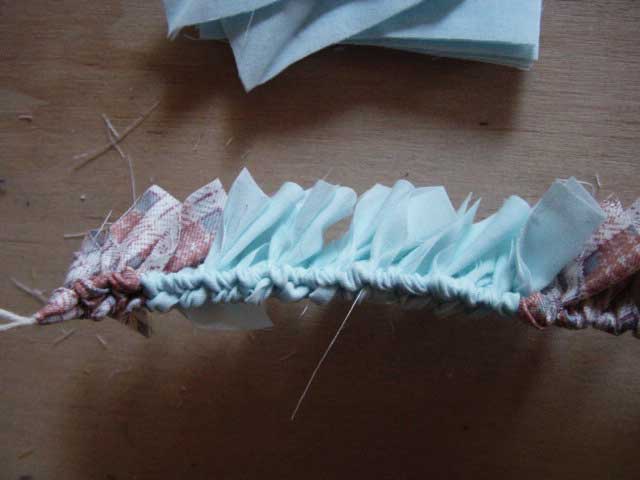 This is what a length of finished knots will look like.

Keep making knots until you run out of warp or it’s long enough. Whichever comes first.
To make a rug you twist your length of knots into a large flat spiral, keeping the pile on one side. Stitch the fabric together on the back with a strong thread. I don’t have any tips for this part yet as I haven’t got that far.

You can also use these knotted lengths for other things. I’m going to try making some with 6 inch long strips of fabric, then trap it in the seam of a cushion for a rag strip fringe. 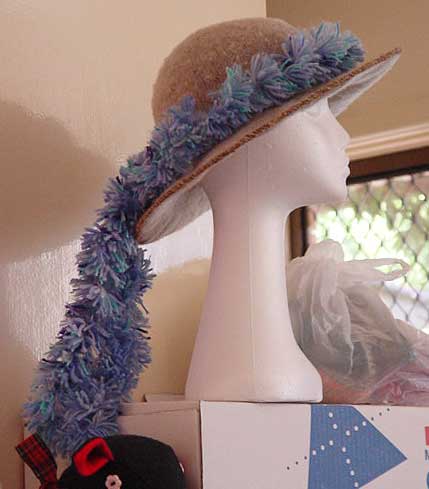 I also made a long piece with yarn. I could see making three long strips and tying them together at regular intervals with another piece of yarn to make a big, thick, fluffy boa.
I’m going to have fun playing with this. It’s remarkably quick to make. I’ll show you the rug when it’s finished 🙂