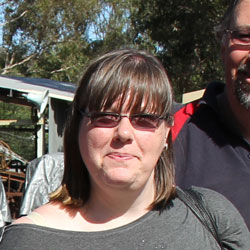 This is me in October 2012. I thought it was time to update that twelve year old photo of me that was here before, except now it’s 2018 so I guess I should take a new one 🙂

April 15th 1970, Surrey, England. I like to think I sound a little bit like a female Harry Potter who has lived in Australia for a bit. Sort of. To be honest, most people ask me where I’m from in New Zealand, but only if they’re not from New Zealand 😉

The east coast of Australia but not as close to the beach as I’d like.

Believe it or not, Knitting-and.com has been online in one form or another since April, 1996. The days of dial-up, no Google and 1Mb website size limits. Yes, that really does say one megabyte.

I sometimes find that really hard to believe myself. As if you could have ever had a website that was only 1Mb.

Hobbies, obsessions, one of those. I’m quite fond of things that involve string. And making string. And by string, I mean yarn. I really have far too much yarn…

Knitting. I’ve been a knitter since I was five years old. I used to love making toys (actually, I still do) but these days I mostly knit cardigans and jumpers, especially for my kids.
Spinning (fibre, not bikes)
Felt making
Embroidery (hand and freestyle machine embroidery)
Drawing
Printmaking. I have a degree in printmaking from Sydney College of the Arts, part of Sydney University.
Painting
Sewing
Body piercing and adornment. In general, if it’s creative, I’ll have a go, although I prefer to wear the jewellery rather than poke holes in other people.