A New Pattern for Baby 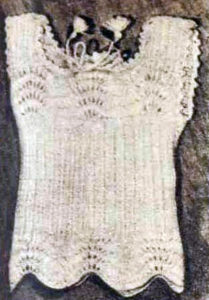 Today’s knitting pattern is an extra treat to break up all the stitch patterns I’ve been posting.

This cute feather and fan singlet, or vest, for babies comes from The Women’s Weekly Magazine, from 1944. As always, I’ve updated the language a bit to make the instructions clearer for today’s knitters.

A Well Designed Stitch will be Popular Forever 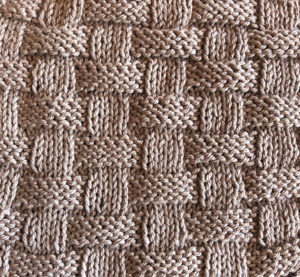 The earliest publication of basket stitch that I have found is this one from 1870, although I’m sure it has been handed down via newspapers, samplers and tradition for a long time before that. It’s a favourite of mine for knitting baby blankets and afghans, worked in worsted weight yarns or Aussie 12 ply thickness.

I’ve taken the instructions from 1890, written them in modern terms and charted them for today’s knitters.

Today’s knitting stitch from my little old timey swatchathon is Chevron Stitch, a knitted lace stitch that was particularly popular in the 1930’s. 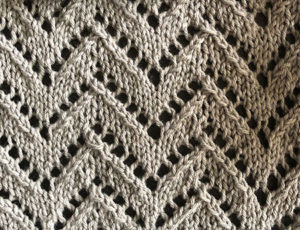 This is a style of stitch that my Mum loved to knit, especially on the short sleeve pullovers in the style that was popular in the 40’s. (Like the Swansea sweater). I can imagine this stitch being used in the centre panel of a lace stole, or even a garter stitch version for a lace weight or chunky knit scarf. But it will always remind me of my Mum knitting short sleeved tops at a speed so fast her hands were a blur.

Yes, I had to look up how to spell bingeing. In Australia it’s binging but my brain says that rhymes with singing and the world prefers it with an e, so an e it has.

Where was I? Oh yes, old timey knitting stitches!

I’ve spent the last week knitting a bunch of stitches from the 1870’s and 1930’s and thought I’d share them with you over the next 6 weeks. I’ll be posting them on two days per week to leave space for other goodies and textile related ramblings. There will be lacy stitches, textured stitches and a couple of rather twisty ones too.

Today I’ll be started with two very simple, very old school knit and purl stitches from The Knitted Lace Pattern Book, published in 1870. Eloquently named stitch 28a and stitch 28b, they are, in fact, two very utilitarian knit/purl check stitches.

I know, they’re not lace. So why were they published in “The Knitted Lace Pattern Book”? Because they’re incredibly useful. I can imagine the large check used to knit baby blankets with a nice worsted weight wool and a thick border of moss stitch all the way round. The small one would be nice on a child’s cardigan or a very understated scarf with a band of red and white a couple of inches from each end. Or two ends of a scarf knit in the small check with 18 to 20 inches of rib in the middle as a Seaman’s scarf! Oh, and afghan squares. I guess it goes without saying that pretty much everything looks great as an afghan square.

Even though they’re very simple, I’ve supplied the patterns in words and chart form, so you can use whichever you prefer. In fact, there’s no reason you couldn’t work the small check in stranded knitting using the chart too.

Come back next time for a cool lace stitch from the 1930’s! (You can be notified by email when I post it by signing up on the left if you’re on desktop, or underneath this post if you’re on a tablet or mobile).

I have a new pattern for you today! 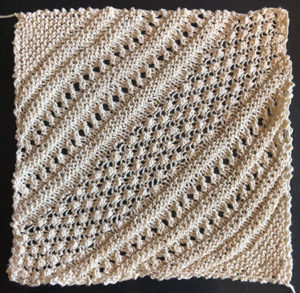 Square for a Quilt (what a memorable name, ahem), was originally published in The Knitted Lace Pattern Book around 1870.

I hope you enjoy this pattern. I’ll be adding most of the Patterns from The Knitted Lace Pattern Book over the next few months so get your needles ready!