The first thing I did after uploading the new version of the website was to get straight back to my Take a Stitch Tuesday samplers. (You can click on the photos for a closer look).

Rice stitch. We didn’t work rice stitch for the last TAST, so even though I’m working on Beyond TAST challenges now, I decided to work up a sampler to add to my stitch books. 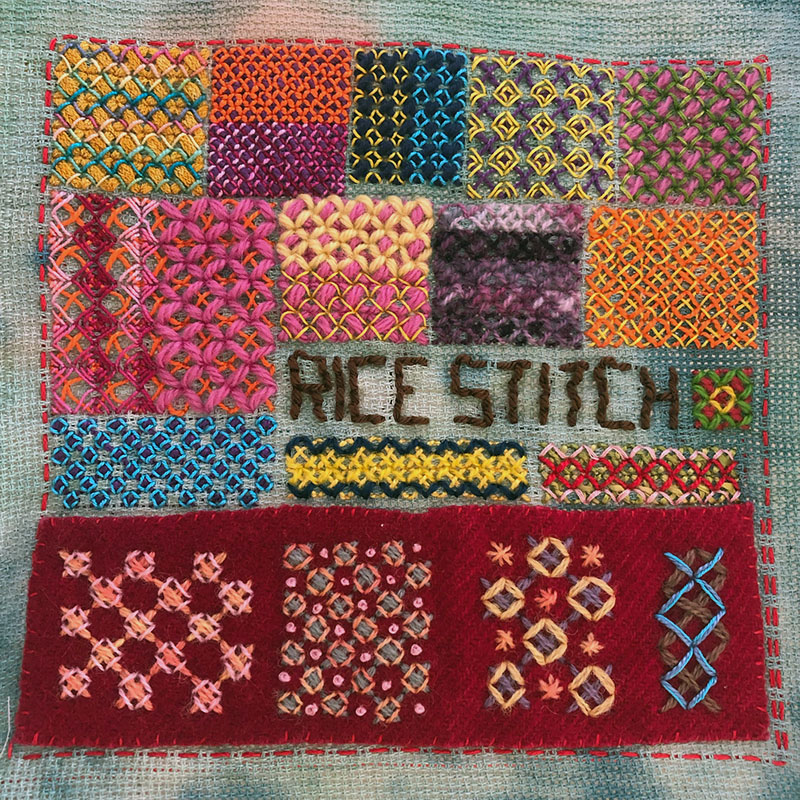 At least, I hated everything I worked above the words. Then I decided to sew on a scrap of wool blanketing and work freehand and I loved it. It turns out that what I really didn’t like was the floppiness of the fabric as I’d washed out all the sizing when I dyed it. If I have any of this fabric left I’ll definitely starch it before stitching on it. I almost always wash my samplers after finishing them so it shouldn’t be a problem.

Speaking of washing, check out how much the orange crochet thread at the top bled! I definitely won’t be using that in embroidery again. I do love it though, I’ll just keep it for some single coloured crochet. Normally, I’d try washing it out but it doesn’t really bother me, what with the multi coloured background and the fact that not much will show once it’s mounted into a book. I didn’t really notice it until after I took the photo.

Next is my latest sampler for Beyond TAST. Exploring layered stitching.

I decided “layer all the things!” would be my premise so I gathered up strips of fabric (cut from previous TAST samplers), unspun wool scraps, and just about every type of thread I own. I even glued on some little plastic flowers. (E6000  glue is just as magic as I had been led to believe). 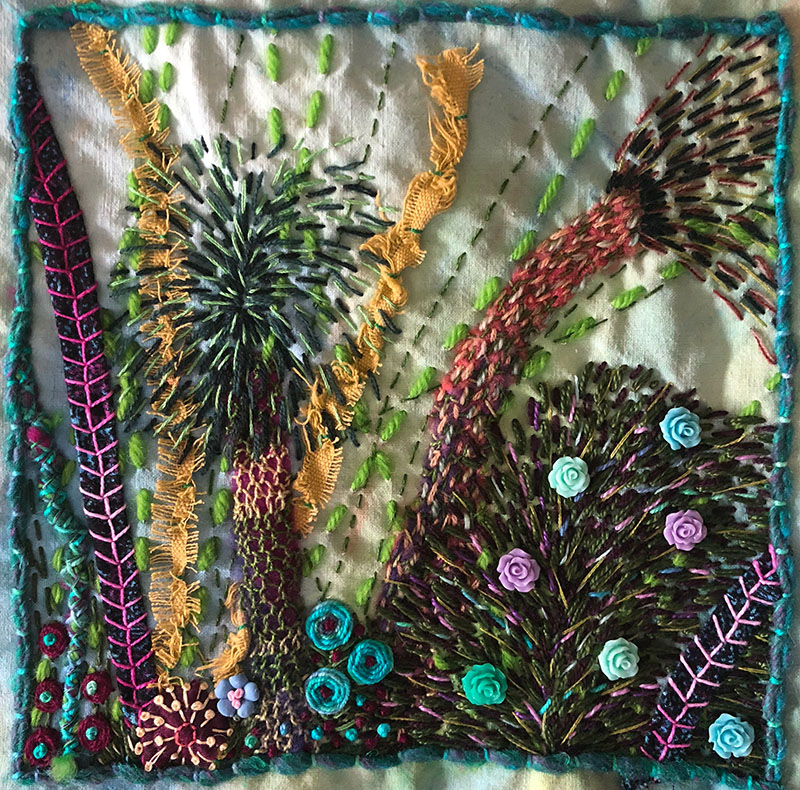 My theme started out as Australian plants and just grew from there. Pardon the pun 😉

I found one of the most interesting parts of this sampler was the layering of colours. I the flower bush, I had worked many shades of green and brown before sticking on the little plastic flowers. Once they were stuck on, they didn’t look like they belonged until I added lots of stitching in the flower colours to tie them in with the background shrubbery. If I were to try this again, I might even go as far as needle felting all sorts of things into the background. I had intended to here but after painting the calico, my embellisher probably would have just shredded it rather than incorporating any fibre into it.

Next up, I’m working on exploring line stitches. I’ll probably end up with two or three 8 inch samplers as there are a few different things I’d like to record.