Free knitting pattern for a doll and netball uniform to fit. One of an ongoing series brought to you by Southern Cross Knitting magazine. 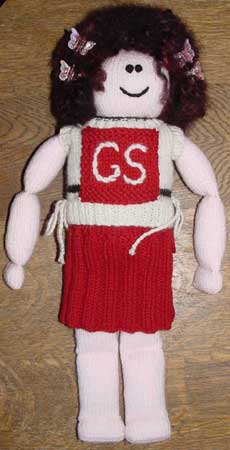 The pattern for Bliss’s Dolly was published online in 1995 as the very first free pattern I designed.

This outfit is designed to fit Bliss’s Dolly, which has a chest measurement of 30.5cm and a height of 42cm

Needles:
3.25 and 4mm straight needles (or knit back and forth on circular needles)
4mm circular needle, 40cm long (or a set of double pointed needles)
A set of 3.25mm dpns for sleeves

Notions:
4 hook and eye fasteners for the back of dolly’s shirt

22sts to 10cm over stocking stitch on 4mm needles

psso = pass the slipped stitches over

RS = right side (the front of your work)

WS = wrong side (the back of your work) 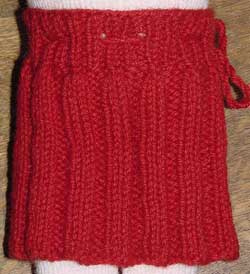 Using red and the 4mm circular needle, cast on 84sts and join for knitting in the round

Darn in ends. Make a twisted cord and thread it through the eyelet round. Put on dolly and tie in a bow to fasten. 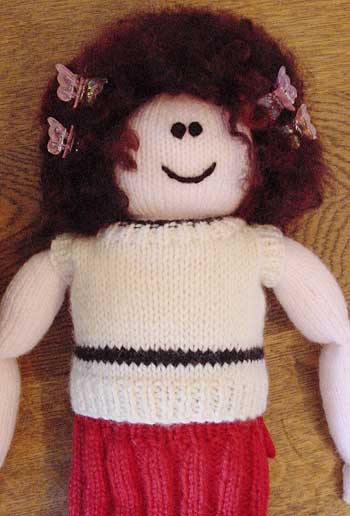 Dolly’s netball shirt is knit flat with a short seam up the back and an opening closed by hook and eye fasteners.

Change to 4mm needles and work as follows:

Change to black and repeat the last 2 rows

Change back to white and continue repeating these 2 rows until your work measures 7cm from the cast on edge.

The next row will divide the knitting into the 2 back sections, sleeves and front

First we will work the right hand back section on the last 12sts as follows:

Repeat these 2 rows until your knitting measures 10cm from the cast on edge, ending with a wrong side row.

Next row: Cast off 2sts for shoulder seam, place remaining 10sts on a holder for the neckband.

With the wrong side facing, join white yarn to the other set of 12sts (this will be the left hand back) and work as follows:

Repeat these 2 rows until your knitting measures 10cm from the cast on edge, ending with a wrong side row.

We will now work the front of the shirt.

With white and the WS facing you, join your yarn to the centre 24sts and p 1 row.

Divide for neck as follows:

K17, place last 10sts worked onto a holder for the neckband, k7.

Work the last 7sts as follows:

With wrong side facing, rejoin the yarn to the other set of 7sts and work as follows:

Darn in all the loose ends and sew the front to the back at the shoulder seams.

Using 3.25mm dpns and white, put 10sts from the holder onto a needle without working them, then pick up 14sts around the rest of the armhole. Work 3 rounds of k1, p1 rib and cast off. Repeat for the other sleeve.

Darn in remaining loose ends, sew back seam from the cast on edge to the top of the black stripe. Sew the hook and loop fasteners to the inside of the back opening at equal intervals. 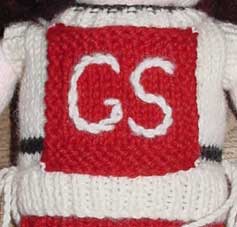 Repeat the last 2 rows until work measures 5.5cm from the cast on edge.

Knit 4 rows and cast off.

Make 8 twisted cords, approximately 10cm long and attach to each corner of both bib pieces. Place bibs on front and back of dolly and tie together using the twisted cords.