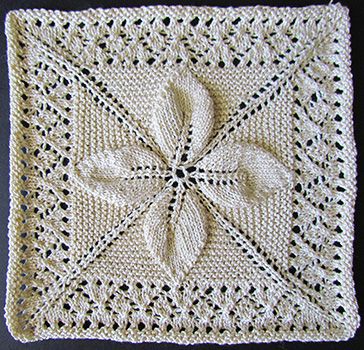 from “The Ladies’ Guide to Elegant Lace Patterns, Etc.”
Counterpane squares with embossed leaves were very popular in the 19th century and the combination of leaves and lace continues to be well loved today. A variation of the Orange Quarter Quilt appeared 7 years after this pattern was published in Home Work (1891), however the patterns differ slightly.

I’ve rewritten the original pattern from “The Ladies’ Guide” to balance the decreases and make it easier to understand.

From the original pattern:

In modern terms size 10 cotton is roughly equivalent to fingering-sportweight on 3.25mm needles but this bedspread can be made with any yarn and needles sized to suit. My sample was knit with perle cotton No. 5 and 3.25mm needles and measures 8 inches or 20 cm square.

This pattern is knit in the round.

Work the directions for each round four times.

Click here if you would prefer a stitch map

Work the directions for each round four times.

Note: The chart will print to the full width of your page.

The original publication of this pattern is in the public domain. However, this modernised version, all charts and photographs are copyright Sarah Bradberry, August 17th 2014. All rights reserved.