My son Charlie recently finished his very first year at school and wanted to give Christmas presents to his teachers. Since I’m raising him properly, cough, he knows that the best things in life are hand made! Of course, being me, they had to made at least partly of wool and they just wouldn’t be as special if Charlie wasn’t involved in making them.

I find weaving is a great textile technique for children. They can make something quickly, try different techniques as they get older and you really only need a board with some nails or a piece of cardboard to get started (if you have older children a pvc pipe loom is a great option as well. It’s faster to weave on and more versatile).

The first thing we made was a blanket using bulky weight yarns (or several strands together to make up a bulky weight) on a Martha Stewart Loom. 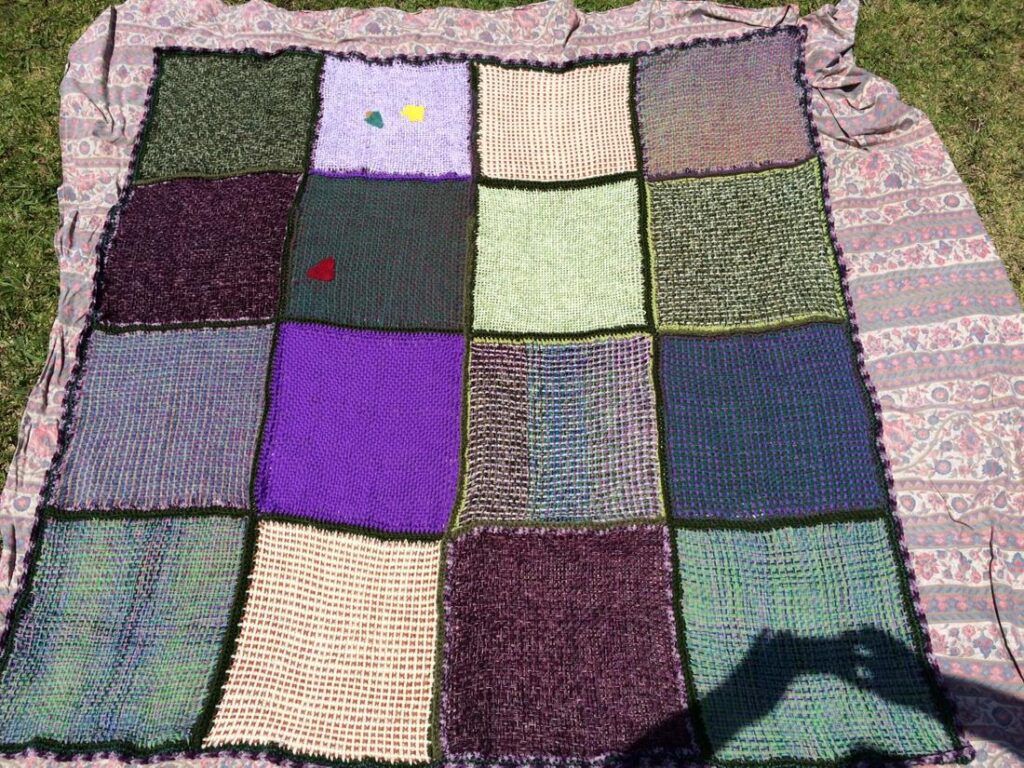 I had 13 of the squares already made so we only had three to go, which was great because I only had 3 weeks to get everything finished. Charlie wove the bright purple square almost entirely by himself and added some needle felted decoration using the cookie cutter method.

I’ve read that this loom isn’t very good for knitting but I love it for weaving. Charlie and I wove our squares using the weavette  or zoom loom continuous thread technique on the loom with the largest square configuration, which means using all of the straight pieces in the kit. I fudged the corners but once they’re crocheted together you can’t tell so it really doesn’t matter.

For his other teacher we made a scarf on a rigid heddle loom.

The yarn is dk weight handspun merino and alpaca and, as you can tell, I didn’t have time to sample the yarns together and the merino shrank in the wash, while the alpaca didn’t. Oops. Considering how much I had fulled the merino, I really didn’t expect it to shrink but there you go, it did. His teacher loved it anyway :). I’m thinking of weaving some yardage using the rest of the purple and blue/green but I’ll have to search the stash for some other colours to put in to make up enough for either a winter skirt or a jacket. Probably a skirt as a plaid jacket would be a bit too, um, daring, I think.

Since this is my last post before Christmas, I want to wish you all a merry one, and if you don’t celebrate Christmas have a simply smashing week! I’ll be back with more free lace edgings a week from Monday, right after I’ve recovered from eating far too many mince pies…