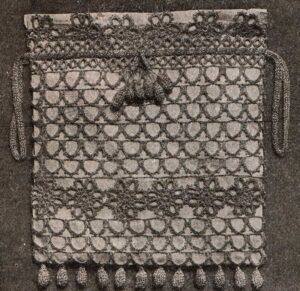 from The Modern Priscilla for March, 1913

Make 5 double stitches (d s), and picot (p); repeat until there are 5 picots, then draw up in the usual way, leaving the ring open about one half inch.

Make another ring, join in first p, continue until 24 rings are made, then join the last ring to the first one, forming a circle.

The remaining rows are made same as first one, joining the middle p each time to centre of space in rings of preceding row.

Make a ring of 8 picots, with 2 d s between, tie, and cut the threads.

Alternate the rings and chains until 8 of each are made.

In making this, two shuttles, or one shuttle and one spool, are required.

Begin with ch of 4 sts and join.

Crochet 4 rows plain, then enclose a tiny ball of cotton, then narrow, taking up every other st, until only one remains, leave a thread four or five inches long to join the ball to the bag.

To join the wheel-band and the top, use needle and thread, whipping over the plain threads of the rings (in body of
bag), 3 st, catch in p of wheel, 3 more whip stitches, then 1 whip stitch in between, 3 more, and catch p – continue until all are joined.

Each row of the plain thread is whipped over in the same way, which holds each ring firmly in place.

The cord, which draws up the top of this bag, is knitted through a spool on six pins, as most kindergarten children
know how to do, each end finished with three crocheted balls. (Dear modern knitters, that’s a 6 stitch i-cord).

A ribbon or a silk cord may be substituted. Line with silk or any desired material.