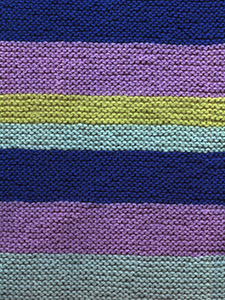 I am going to take the opportunity to flash a little math, mostly with the idea that you will be able to look up some of this stuff if you ever do want it. So, pencils down, no test later.

Remember, if your eyes start to roll back in your head or if you start to hyperventilate, take a deep, cleansing breath and chant the mantra, “No test, no test, no test.”

Remember the name, because that is the generic heading of the area of number theory in which Fibonacci numbers and Golden Ratios (aka Golden Means) appears. This will let you find the books with all the illustrations that ASCII won’t support.

If you want to stop now, trust me. Get a book with pictures that talks about Continued Fractions, Golden Ratios, and Fibonacci numbers. Then convert the illustrations to knitting charts.

Otherwise, “Ave Caesar, morituri te salutant” [salutem? Someone corrected this, but I can’t remember what it was supposed to be.] Here we go with some more information that can help you do your own.

Imagine that you have a line segment on the paper in front of you, and you want to divide the line segment into two parts:

This is why mathematicians like it. The Greeks called it “Golden” because they had some kind of religious ecstasy when numbers came out neat like that. Designers like it, because for some reason no one knows very well, the human brain just loves this ratio. (And you should see some of the wacky theories why.)

NON-IMPORTANCE ALERT: Number theorists wax romantic over g because it is the only irrational number with a continued fraction expansion that only uses the digit “1” over and over.  But number theorists are modern practitioners of the Greek neat-numbers religion, so what do you expect?

This is why some buildings look “nice”, why 3 x 5 cards are popular, and why flags are the particular shape that they are (usually).

If you take those two “golden” line segments that you made and use them for the sides of a rectangle, you get a Golden Rectangle. Remember, that means

For example, 5/3 = 1.67, pretty close, so the human brain finds that rectangle pleasing. Hence, 3 x 5 cards. A4 paper is closer to Golden than US letter size, by the way.

You can check with a good picture of a Greek temple and a ruler:  the width of the front of the temple divided by the height will almost always come out to 1.62. (Did you think I was kidding about the religion part?) Also buildings by Thomas Jefferson,  modern national flags, and US “pocket” paperback books.

For a further look into the weird (which actually leads to cool pictures, you should really get a book and look), we move to seashells and Golden Rectangles.

If you have an 8 x 5 Golden Rectangle, you can divide it into two parts.

This spiral, it turns out, is often just what the spiral of a seashell looks like. Again, plenty of room for weird mystical theories. [But it probably has to do with the way the cells divide.]

Now, there are a whole bunch of cool things about Fibonacci numbers (and similar series). For example, look at a plant stem and the leaves on it. If you follow the leaves up from the bottom  of the stem, you notice that they spiral around — the next one is not only higher, but a little to one side. If you do this a lot, you notice that the ratio of times around to the number of leaves before you get one leaf directly above the other is often a Fibonacci number. (This is
the rusty part. Something to do with Fibonacci numbers, anyway.) Also pine cones, I think.

Fibonacci numbers also give winning strategies for playing some games, and optimal search strategies for some kinds of computer programs. And also (this is how we get back to sweaters) they are mixed up in some neat
(that word again) Continued Fractions.  What does that mean for sweaters? Look what happens when you divide one Fibonacci number by the previous one:

There is the Golden Ratio again. As you go farther and farther along the series, the ratios bounce back and forth from one side of g to the other, but always getting closer. For practical, everyday purposes, by the time you get to 3 & 5, or 5 & 8, you get the Golden Ratio from then on!

The messy part at the beginning is why Avital didn’t like the first parts of the Fibonacci sweater she mentioned — it hadn’t gotten very close to “golden” yet. And that is why it looks nice from the 3 or the 5 part onward. If you take two Fibonacci numbers in a row and divide sweaters into parts based on those numbers, then human eye will like it.

One year at Stitches I took a workshop with Gloria Tracy on applying color theory using up your stash. She had us do some exercises (a la sandbox style) with setting up color sequences of  yarns wrapped around cardboard, using variations of Fib sequences, such as a bell curve (8,5,3,2,1,2,3,5,8), doubling (10,6,4,2…) and various other ways to play.

I’d love to see a whole magazine series on how to apply some of these magic formulae to designing.