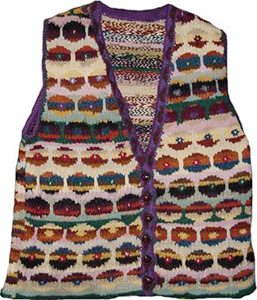 These tips were collected from various email lists

My strategy for using a gazillion different colours is to add in a length of whatever colour is needed and rather than winding it into a bobbin, I just let it hang loose. This way when the different lengths get tangled, which they will, because they are only about a meter long, I just run my fingers through them to disentangle or pull out only the colour needed.

Go for knitting with manageable lengths (no bobbins). I have done Kaffe’s work in every possible way, and knitting his patterns with bobbins is maddening

Use lengths of yarn that are no more than a couple of feet long. Pull whatever color comes next out of the fray and knit with it. Tie on (gasp!) more of that color (or preferably a slightly different shade) when you get to the end of the length. Knit in the loose ends as you go.

Kaffe is always the first person to offer the disclaimer that his type of knitting is not about technique. He uses some techniques that are not for the faint-hearted (like having knots all over the place). I will tell you that I am a technical purist when it comes to Arans. Even with the knots, though, my Kaffe projects have resulted in such compliments as
a woman running out of her shop and offering to trade anything in her shop for my sweater.

Several people wrote me about the Kaffe Fassetts I’m working on (well, one in the works and two in the planning stages), and what I get a lot of is “I’d love to try, but they look so difficult!” But they’re not. Almost everything of his is either intarsia or two-colour-per-row fair isle (all his earlier work, anyway), neither of which is a particular challenge. They look so tricky because they incorporate a lot of colours, but since you’re only using a few of them at a time, and changing them very frequently, it’s manageable.

One important thing to remember is that bobbins are not a good idea. For the intarsia patterns such as the Steps garments, you just cut off a few yards of each colour and keep using them ’til they’re used up. Then you tie on new colours and keep going, knitting in the ends as you go. This way, you don’t have any big tangles in the back, you just pull the strand you’re using free of the tangle as you go and you have the impetus to change colours frequently. It’s really, really simple, and it’s among the most gratifying knitting you can do; the only thing that even comes
close is dense cable work and airy lace.

For the fair-isle patterns, all you have to do is keep the yarn attached to the balls. It will want to tangle, naturally, but there are two tricks you can use to keep this from getting unmanageable. First, don’t twist the yarns around each other, they don’t need this, as they do in intarsia, but, if you can’t hold one colour in each hand (I can’t, because I can’t do continental), always carry one colour along the top and the other along the bottom. The way I remember this is by calling one colour will be light and the other dark, and always carrying the light yarn along the top, because if it’s light, it must float. This way, there are never any tangles.

Second, you may well be juggling up to six balls of yarn, because many of his garments are knit on large needles (my jacket is on 6.5 mm needles) and you’re encouraged to combine several thinner strands for even more colour variation. I prevent tangles by placing two large bowls at my feet, and placing the dark yarns in one bowl and the light yarns in another. Works like a charm. If you’re knitting off some cones, of course, you’ll just stand the cone next to the bowl.

I really encourage everyone to try at least one KF garment. Start with something simple from the Glorious Knitting book, such as the Large Steps jacket or the Persian Poppy vest. His main motto is, “When in doubt, add twenty more colours”, and I have to agree; you just can’t go wrong if you flood your work with colour. The most yarns you use, the more glorious it will be. You can scarcely imagine the pleasure you’ll get when you wear a KF garment, looking like a stained-glass window, and someone asks you in awe and astonishment if you made it yourself.