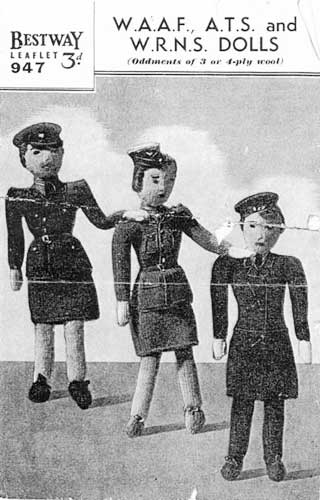 from Bestway Leaflet No. 947

This pattern was kindly supplied by The Second World War Experience Centre in Leeds, West Yorkshire. Please consider making a donation to the museum if you enjoy this pattern.

The original doll was about 12 ins high.

Commencing at the foot, cast on 4 sts with black wool, and working in st st, increase at the beginning of 1st – 5th row (9sts) then work 3 rows on the sts.

Decrease twice in the middle of next row.

Inc twice in middle of next row.

Change to grey and work 48 more rows, then leave the sts on a safety pin and make a second foot and leg in the same way.

With Air Force blue work across the second leg sts, cast on 1 st and work the 1st leg sts.

Cast on 31 sts with Air Force blue and k 3 rows, working into the backs of the sts on the 1st row.

Change to st st, starting with a p row and work 25 rows.

Work 3 rows straight and leave on a spare needle.

Cast on 15 sts with Air Force blue and k3 rows, working into the backs of the sts. on the 1st row.

Work another piece to correspond with decreases at the beginning of the knit rows, and border at beginning of p rows.

K7 sts of second piece, place remaining 5 sts in front of first 5 sts of first piece and k them tog in pairs to join the two pieces

place in front of lower part of body and k each tunic st tog with a body st.

The Hands and Arms

Cast on 1 st at beginning of next 2 rows.

Change to Air Force blue and inc, at both ends and twice in the centre of the first row.

Leave on a spare pin and work another piece in the same way.

Take the second 7 sts of one arm, 21 body sts and the first 7 sts of the other arm and work 6 rows on these 35 sts, placing the other two sets of 7 sts on safety-pins.

Next 2 rows: Cast off 11 sts with Air Force blue, work the 9 middle sts with pale blue.

Work 2 rows in pale blue, then change to flesh pink and work 2 rows.

Cast on 4 sts with black wool and in at beginning of 1st – 5th rows.

Now work 1 st more in each row until all 9 sts are worked.

Change to grey wool and continue as for front until the arms are reached.

Take in the 2 sets of 7 sts from the safety pins and work 8 rows straight.

Cast on 8 sts with Air Force blue and inc at both ends of the first 4 rows and following 5 alternate rows.

Dec at both ends of next 5 alternate rows and following 4 rows.

Gather the edges of the cap and draw up to fit the head.

With black work a row of dc all round,

With Air Force blue work tr into each dc, starting 3 dc from peak and working round to a similar point on other side. Turn up flat against headband.

Join seams of feet and stuff, then gradually complete all the seams of the body, stuffing the doll as the seams are made.

Join the skirt seams and side seams of the lower tunic.

Tie round the ankles with black wool, tying on the instep to simulate shoe laces.

Wind Air Force blue wool about ten times round waist to simulate a belt and indicate the pockets and revers with straight stitches.

With pale blue indicate the collar and the wings on the sleeve tops.

With black wool form the tie.

With brown wool cover the back of the head with long, straight stitches to simulate hair, and finish with curls made by taking up about ¼ in of the fabric on the needle, wind wool ten times round the needle and draw through (embroidered bullion stitch).

Embroider features on face in appropriate colours and put a little rouge on the cheeks.

Sew the cap on the head.

Work as for the W.A.A.F. using brown wool instead of black, fawn instead of grey and pale blue, khaki instead of Air Force blue.

Cast on 2 sts with orange wool for the top, and inc at the beginning of the first 6 rows.

Dec at beginning of next 6 rows.

Cast on 40 sts with brown for main part and work 8 rows, increasing at beginning and in middle of 3rd and 6th rows.

Join the back seam, then set in the orange part by working dc with green wool through both parts of the work tog.

Fold in the top, and press.

Indicate the folds of the cap with long straight sts, and indicate badge and buttons with yellow wool.

Make up as for the W.A.A.F. using the appropriate colours.

Work the tie with khaki wool.

Begin as for the W.A.A.F., but with legs as well as feet in black, and using Navy Instead of Air Force blue.

Transfer the 19 body sts to a spare needle after 15 rows.

With Navy wool begin as for the W.A.A.F., but after the 2nd decrease row has been worked, k the next row (p side) and on the next row k2, place the next 19 sts in front of the 19 body sts and knit together in pairs, k remaining 2 skirt sts.

Work 13 rows straight, then make hands and arms and proceed as for W.A.A.F., using Navy Instead of Air Force blue, and white instead of pale blue.

Work the top as for the W.A.A.F., using navy blue wool.

Cut a circle 2 ins across from thin cardboard and insert into the knitting after gathering the edges but before drawing up.

Draw up and fasten off the gathering thread.

With black wool work 2 rounds of dc to form the headband, picking up the sts about 1/8 in outside the gathered edge.

With yellow wool indicate the letters H.M.S. on the front of the band.

AS for W.A.A.F., using black wool for buttons and tie, and white to indicate collar.

The original pattern is in the public domain, however this digital version is copyright Sarah Bradberry May 23rd 2012. All rights reserved.