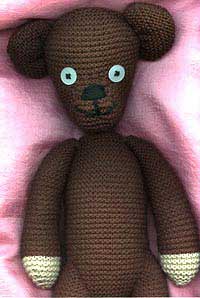 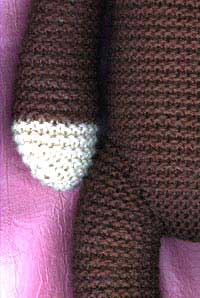 I recently had the opportunity to watch my brother’s Mr. Bean videos (over and over and over…) and thought it was the perfect opportunity to finally get this pattern designed. I actually had to wait for my brother’s videos to arrive from England by ship, and what with the recent strikes on the docks here in Australia they were somewhat delayed. Anyway, this bear is designed to look like the bear from the Mr. Bean TV series and movie, not the toy you can buy in the shops. It’s easy to knit since all but the front head are knit flat in garter st.

I hope you like it, but watch out if you decide to show the finished product to your friends! (Everyone I showed it to wants me to make them one!)

Oh, and it has a floppy neck just like the bear in the movie so you can re-enact the “hypnotize teddy” scene for your friends 😉

A scrap of pale beige 8 ply (DK) for hands

Scrap of black yarn for nose and eyes

inc = knit into the front, then into the back of the next st

M1 = Make 1. Pick up the bar lying between sts and knit into the back of it.

Use dark brown unless otherwise stated. Bear is knit entirely in garter st.

Inc 1 st at each end of the next row, and every following alternate row until you have 26sts.

K2tog at each end of the next row, then every following alternate row until 12 sts remain.

K2tog at each end of every alternate row until 8 sts remain.

K2tog at each end of every row until 2 sts remain.

Change to pale beige yarn and work paw as follows:

dec 1 st at each end of every row until you have 8 sts.

2nd and all alt rows (unless otherwise stated): Knit

Work as for back head from * to end.

Cast on 22sts and knit 8 rows. Shape as follows:

Sew seams on all pieces except ears, making sure to leave a small opening for stuffing.

Sew foot base into unshaped ends of legs.

Stuff legs firmly and sew to body as shown in the photo above. Fill tops of legs while sewing to ensure fullness.

Fill arms firmly for 2/3 their length, stuff remaining 3rd lightly. Fold top of arms so that the seam is in the centre and sew closed.

Sew bottom of head closed and so to head so that the neck remains very floppy.

Sew a neat gathering stitch around the snout at the point where it meets the front of the face and secure neatly to keep snout in shape.

Sew ears together along shaped edge and stuff very lightly.

Gather lightly along bottom of ears and sew to head, using photo as a guide.

Embroider nose using black, making sure to place mouth in the centre of the snout for that typical “Mr. Bean’s Teddy” happy expression.

Sew buttons to head with black yarn, making an “X” shape in each one. If the toy is intended for a small child use circles of felt instead of buttons, and embroider an “X” in the middle of each one.

This pattern is Copyright © Sarah Bradberry July 20th 1998, all rights reserved. This pattern may be printed for personal use only, and this copyright notice must be kept intact.