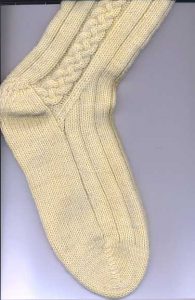 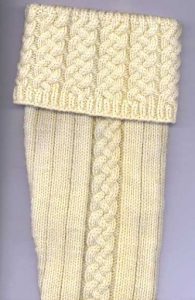 This is a toe-up pattern that I have named in honor of the man Robert Burns addresses in his poem “John Anderson, my jo”. It is one of my all-time favorite poems.

I found a different way of working toe-up in an old issue of Knitter’s Magazine. The method was explained by Joan Schrouder. The heel turning is worked just the same as in the top-down method. The heel flap and short-row turning is worked on the sole stitches. The turned part of the heel will be on the back of the heel, not under it. There are no gusset increases made in approaching the heel as with some recipes, and yet there is a gusset for a nice fit over the instep. In Schrouder’s original recipe, the gusset decreases slant out toward the sides and closely resemble gussets knitted top-down. In my adaptation, the decreases slant toward the center and work elegantly with the Celtic braids down both sides of the leg, giving a solid vertical look. The cables on the sides of the legs are lower down, closer to the sole than is seen on most top-down hose.

I have always loved Celtic art, motifs, braids and knotwork. I know that Aran is an Irish island and that “Aran knitting” is a 20th century invention. I know that Robert Burns and “John Anderson” lived in the 18th century. But to me, the braids and cables of the knitting known as “Aran knitting” nevertheless evoke the mystical and romantic spirit of Scotland of centuries past. They seem perfectly at home on kilt hose.

On Size and Gauge.

I highly recommend knitting on one or two circular needles. It is a lot easier and less “fiddly” than double-points. Socks, stockings, hose, and sleeves are can be easily slipped on with the stitches on the flexible cables, making fittings a snap, doing away with a lot of guesswork. Suit yourself. If you do use dps, I suggest you put the sts on four of them and knit with a fifth. With your sts on five needles, there is less stress at the point between needles and your hose are less likely to have gaps where you change needles. I used a generic “worsted weight” wool knitted on two 24″ 2.5mm needles for a gauge of 7 sts per inch over stockinet. Before they are washed they will be fairly stiff.

The pattern is formulated for a 10″ (25cm) foot with a base circumference of 9″ (22.5cm). The patterning at the leg-foot joining is figured on an exact st count of 62, so that the braid pattern and the ribbing on the foot flow smoothly into the leg ribbing. If you need a smaller or larger size, vary the yarn and needles you use to adjust the circumference. A little figuring and experimenting should take care of most leg and foot sizes. When in doubt, swatch it out! The foot and leg can be easily lengthened by working more or fewer rounds; the foot by adding or subtracting rounds between the toe and the start of the heel, and the leg, above the heel before the calf shaping, before the ribbed “garter” area, or in the garter area itself. After you’ve made a pair, you can alter the st counts into the pattern, knowing how it all works at the gusset juncture.

The experienced sock knitter can easily adapt this pattern to the traditional top-down method with the usual heel and gusset treatment.Also, by eliminating the ribs from the pattern,stitch counts can be changed, and there isn’t any fuss over having to do complex figuring to get the foot ribs to merge “seamlessly” with the leg ribbing.

According to the Scottish Order of Dress (Military regulations), kilt hose are to be worn 8cm (3.2″) below the kneecap. A general rule of thumb says that “three fingers” below the kneecap is close enough. No mention is made as to what is or isn’t worn under the kilt….

1) Make YO by taking the yarn to the opposite side and working the next stitch. For knit rows, yarn is to front, for purl rows the yarn is at the back.

3) To “correct” the mount of the right side sts: insert the right needle into the stitch from the back, slipping it onto the right needle, repeat as needed, then slip the st(s) back to the left needle.

Continue as established, working one less st each side until purl row is worked YO, P11. Turn.

Pick up the sts of the cast on edge by knitting up the yarn between the loops of waste yarn. Depending on your cast-on method, you will probably need to pick up one or two sts to make the total come to 62. Pick up any needed sts at the sides of the toe.

Repeat this round until piece measures 7″ (or desired length minus 2.5 to 3″) from the tip.

Work heel flap. Knit in stockinet the 31 sts of the sole only. You can knit them plain, add a reinforcing thread,or begin working “Eye of the Partridge” stitch*** with the center st, increasing it by one st on each side on every right side row, through the heel turning. If you are knitting a firm fabric, you can do without the reinforcement. You can always go back and apply a reinforcement by weaving in another yarn on the WS if you change your mind.
Continue heel flap for 32 rows. Sole should measure 10″ , ending with a purl row.

Continue as established, working one more st each row, until all sts are worked in. End with purl row. 19 sts.

Knit across heel sts. (Cease heel st or drop reinforcement if you are using it.)

Round 3: Work sts as they present themselves, K the K sts, P the P sts, slip markers.

Round 6: Work sts as presented, decreasing at gussets, after 1st marker and before 2nd marker as established on each side.

Round 8: Work all sts as presented, decreasing at markers.

Round 10: Work around as established, working K2, FC4, K2 over braids.
Continue in established pattern, working the decreases on even rounds, and twisting the braids every third round, until 10 decreases have been worked on each side. 62 sts.

Work as established until piece measures 5.5″ -6″ above sole.

Purl 1 st. Increase 1 st by picking up the strand between the sts and knitting it through the back, continuing around and increasing after the last st. {This can alternatively be done by purling twice in the seam st and knitting twice in the last.} Work these sts into the pattern on the following round as purl sts.

Work increase round adding the new sts as K sts on both sides of the purl seam st.

Continue with braid pattern and increases every 6th round, working sts into the 4/1 rib pattern, until there are 8 knit panels in the rear section, back of the braids. On the next increase round, change the P seam st to K and increase 1 st on each side as before. These will be P sts. At the next increase, work the added sts as K sts on either side of the center K st, and on the final inc, work the last incs outside the central three K sts. There will now be a central 5 st knit panel centered on the back of the leg. Work evenly on 88 sts until leg measures about 14″ or desired length from sole. (Remember the 3-fingers rule.) End when braid pattern is 2 rounds after a twist round if possible.

Turn work inside out. We are going to be knitting back the other way round.
Wrap the yarn around the last st on the right needle. Knit up this wrap when you get to it at the end of the next round.

This section is knitted on fewer sts, forming a tighter area that helps the hose stay up.

Bind off loosely in ribbing, using a needle 1 or 2 sizes larger.

PS: *** The “Eye of the Partridge” heel stitch is worked similarly to the regular Sl1, K1 heel stitch, but varies in that the slipped sts of the present RS row are the ones that were knitted on the last RS row. It produces a subtle “watermark” kind of look. In this pattern though, the reinforced area starts with a single centered slipped sts and is expanded by one st on each side on every RS row. In other words: (The first st of all rows is slipped.)