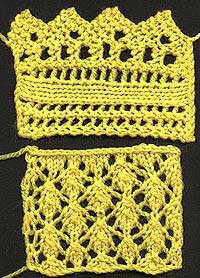 Cast on a number divisible by 6 and 2 extra.

Purl 8th row, then repeat these eight rows for length required, usually a square. Edge with a knitted lace.

Rep these 8 rows for length around finished shawl.

Sew lace around edge of shawl, gathering slightly at the corners so the lace lies flat.

This pattern is in the public domain. These instructions are based on the version from Handycrafts Magazine, series A2. c 1962. This digital version is Copyright Sarah Bradberry March 31st, 1999