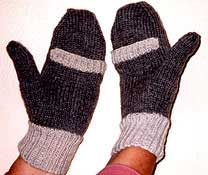 These work mittens were originally designed for my sister who wanted a pair of mittens that would allow free finger movement when needed without freezing her hands. They are sized to fit an average size medium. (The picture shows my Mum wearing my sister’s mittens. Since Mum has larger hands than sis the mittens look a little short in the picture).

I made an earlier version for my father before I knew anything about knitting thumb shaping in the round and considering the technique I used I’m surprised I ever finished them! But be assured that this pattern is thoroughly tested and I now know what I’m doing. 8*)

M1: Make 1
Pick up loop lying between sts and knit it, making sure to twist it so as to avoid making a hole.

SSK: slip, slip, knit
Slip 2 sts, one at a time, as if to knit. Put left hand needle into sts and knit them together in the normal manner. You should now have 1 st on the RH needle.

Change to 4mm needles and main colour and work 2 rounds. *

K34, slip last 13 sts just K onto a st holder (I use a double thickness of yarn) to pick up later for thumb. K rem sts.

Graft the end of the mitten together using kitchener st.

Thread yarn through sts and draw up tightly. Fasten off at the back of thumb so the darning does not irritate the tip of the thumb.

Using contrast colour and 4mm needles pick up 19sts at the bottom of finger opening (on the palm of the mitten) and work 6 rows K1 P1 rib. Cast off loosely in rib.

Bring ribbing on upper edge of finger opening to the inside of the mitten and catch down the sides firmly.

Bring ribbing on lower edge of opening to the outside and catch down sides neatly.

Left Mitten Work as for Right Mitten to *

K31, slip last 13 sts just K onto a st holder (I use a double thickness of yarn) to pick up later for thumb. K rem sts.

Complete as for Right Mitten from ** to end.

Darn in all ends.

This pattern and all images on this page are Copyright © Sarah Bradberry 1996.  All rights reserved