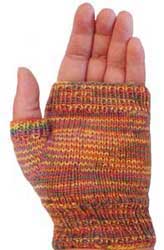 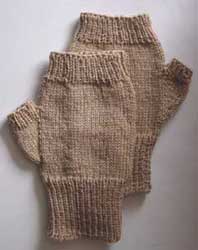 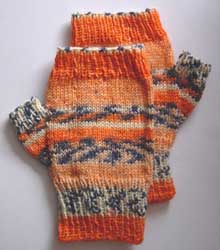 Yarns from left to right:

Lady’s medium: to fit a hand with a 20cm circumference.

Needles: A set of double pointed needles in sizes 3mm and 3.25mm

m1 = make one stitch by putting your needle under the bar that lies between stitches, twist it (to avoid making a hole), and knit it.

SSK is an alternative way of working the old “slip 1, K1, pass slipped st over”, which is a leftward slanting decrease.
Slip the next st from left hand needle to right hand needle knitways. Slip next st the same way. Return both sts to left hand needle in their new twisted positions and knit the two stitches together.

Using 3mm needles cast on 56 sts and join for knitting in the round. Place a marker at the beginning of the round.

Change to 3.25mm needles and work in stocking st (knit every round) for 1cm.

Continue increasing in this manner (working 2 more stitches between m1’s on every second round), until you reach k26, m1, k17, m1, k29

Next round: k26, put the next 19sts on a stitch holder or waste yarn, cast on 3sts, k to the end of the round.

Continue in stocking stitch on these 56 sts for 2cm.

Using 3mm needles, slip the stitches from your st holder onto your working needles, then pick up 5sts at the point where you cast on 3sts for the hand of the mitt after completing the thumb gusset. Place a marker for the beginning of the round.

Darn in any loose ends, making sure to neaten any holes that may be visible near the base of the thumb ribbing.