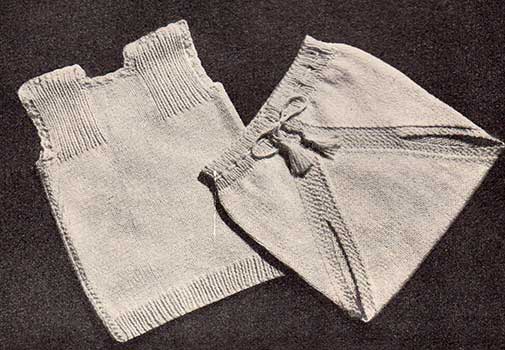 To get these measurements it is absolutely necessary to work at a tension to produce 7½ stitches to the inch in width, measured over plain smooth fabric.

Note: This pattern uses UK crochet terms. UK dc = US sc, UK tr = US dc and so on

Work on last 20 sts as follows:

Cast off in rib.

Join in wool at neck edge and work on remaining sts to correspond with other side.

Work exactly as given for Front.

With a slightly damp cloth and warm iron, press lightly.

Sew up side seams.

Using Crochet Hook, work an edging round neck, along shoulders and round armholes, as follows:

With a slightly damp cloth and warm iron, press lightly.

Cast off in rib.

Make a crocheted chain and thread through holes at waist, attaching a small tassel to each end.

The original publication of this pattern is in the public domain, however this digital version with additional information is copyright Sarah Bradberry, July 6th 2012. All rights reserved.