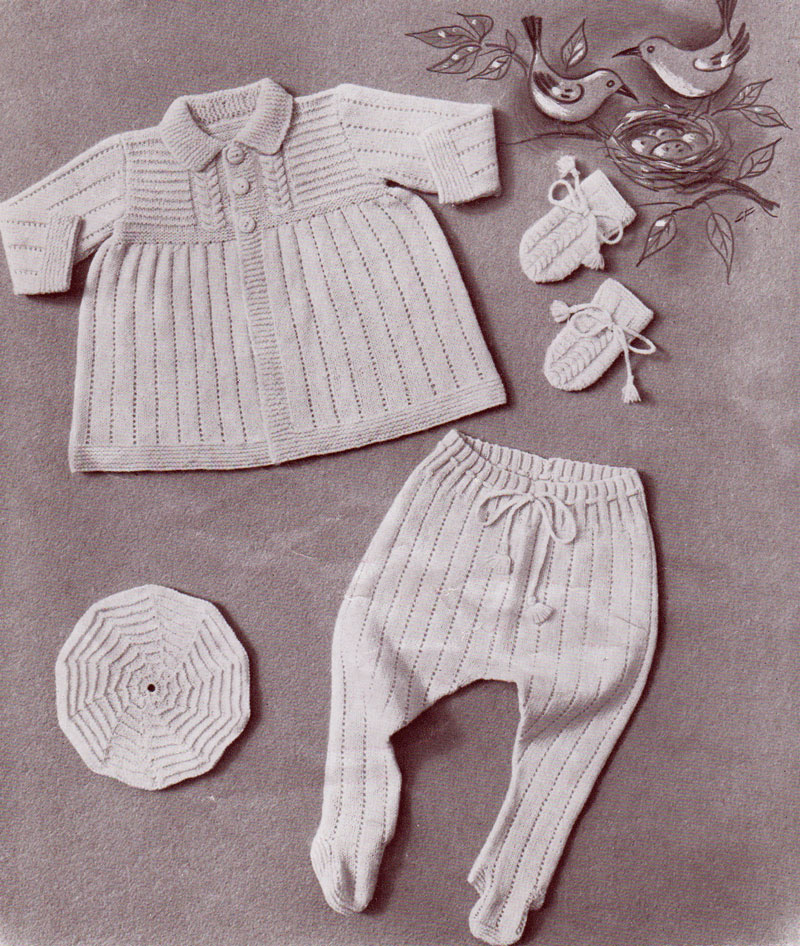 a small spare double-pointed needle for working the cables.

7 sts to 1 inch on larger needles.

NOTE: If the set is for a girl, work the buttonholes on the Right Front.

yo, yarn over (by bringing or leaving the wool forward before a k st, or winding the wool around the needle before a p st);

tbs, through back of sts;

moss st (K1, p1 alternately on an uneven number of sts, but when working over an even number always work a k st over a k st of the previous row); 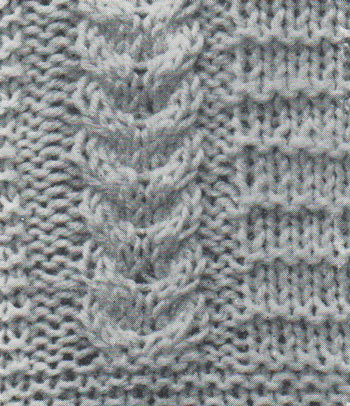 The Back: Using larger needles, cast on 115 sts and work 12 rows in garter stitch (every row k).

Rep these last 2 rows until work measures 9½ ins, ending with a 2nd row.

Change to smaller needles and dec for waist as follows:

Change to larger needles and work in the following yoke patt:

These 4 rows comprise the patt.

Shape Armholes: Cast off 3 sts at beg of next 2 rows, then cont in yoke patt, dec 1 st at both ends of every row until 58 sts rem.

Cont in patt without further shaping until armhole measures 4 ins. on the straight.

Rep these last 2 rows once. Cast off rem sts.

Rejoin the wool at neck edge and work the other side to correspond reversing shapings.

Now work in patt with a garter st border as follows:

Rep these 2 rows until work measures 9½ ins. ending with a second row.

Change to smaller needles and dec for waist as follows:

Now work in yoke patt with a cable border up front as follows:

These 4 rows comprise the patt.

Shape Armhole: Cont in patt casting off 3 sts at beg of next row, then dec 1 st at this same edge on the following 3 rows (36 sts).

Work straight in patt with borders correct until armhole measures 3¼ ins. on the straight, ending with a wrong side row.

Shape Neck: Cast off 13 sts at beg of next row, then, keeping the patt correct dec 1 st at neck edge on the following 6 rows (17 sts).

When armhole measures the same as for back to shoulder shape shoulder by casting off 6 sts from the armhole edge on the next 2 alternate rows, work 1 row, then cast off rem sts.

Left Front: Work to correspond with the Right Front with the border and all shapings at opposite ends of the work.

On the following row cast on 2 sts to replace those cast off.

When the garter st waistband is completed, work the next row thus:

Now work to correspond with opposite side with all shapings reversed, making 2 further buttonholes at intervals of 1½ ins. (the top one to come about ¼ inch from neck edge).

Now work in patt as for back of coat, inc 1 st at both ends of every 6th row until there are 55 sts on needle.

Cast off, working 2 tog at both ends of row.

Rep these last 10 rows until collar measures 8½ ins. along the shortest edge. Cast off.

Cont in this way, working 10 more sts on every alternate row until there are 24 sts left unworked, turn and work back, inc 1 st at end of row (85 sts).

Change to larger needles. With right side of work facing cont in patt as far back of coat, inc 1 st at the longest edge on the 3rd and every following 10th row until there are 91 sts on needle.

Shape the Leg: Cont in patt dec 1 st at both ends of the next and every follow ing right side row until the sts are reduced to 43.

Cont without further shaping until leg measures 9 ins from commencement, ending with a right side row.

Break off wool and join on the rem 23 sts.

Left Leg: Work to correspond with the right leg, reversing all shapings.

Before shaping the instep, end with a wrong side row instead of a right side row.

Using smaller needles, cast on 92 sts and work 4 rows in garter st. Do not k into the back of the cast on sts.

Change to larger needles and work as follows:

Cont in patt as for yoke of coat for 8 rows without shaping.

Now dec for crown as follows:

Cont in this way (in the yoke patt) working 1 st less between the decreasings on every alternate row until 20 sts rem.

Break off wool, thread through rem sts, fasten off securely and sew down seam of beret.

Now work in patt as for back of coat until work measures 1½ ins. ending with a 2nd row.

Rep the last 4 rows until work measures 2¼ ins. from ribbonholes, ending with a wrong side row.

2nd and every alternate row: K or p according to yoke patt.

Work another mitten the same.

Press work lightly with a worm iron over a damp cloth omitting ribbing and cable borders.

Attach collar to neck, allowing half of each side of border to overlap at centre front.

Join sleeve and side seams in one operation.

Press all seams. Sew on buttons.

Join up the front and back seams, then sew up the leg seams.

Stitch a piece of elastic under each instep.

Thread waist with a crocheted cord or elastic.

Join up seams and across top.

To Make a Crocheted Cord: Using the wool double, crochet a sufficient length of chain and thread through the ribbonholes.

Finish off ends with pom poms or tassels.

The original pattern is in the public domain, however, this digital document with additional information for modern knitters is copyright Sarah Bradberry, April 13th 2014. All rights reserved.