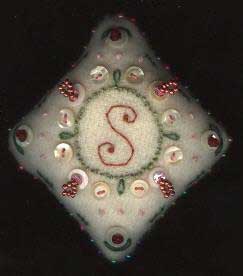 I was looking for a quick little project to embroider last weekend so I designed this pincushion using lots of little sparkly things from my oddments box. I think it would make a nice little Christmas gift for any sewing friends.

1: Trace a 10 x 10cm square onto your tissue paper. Join the diagonals to
find the centre and draw a circle with a 4cm diameter in the centre.

2: Place the tissue over your fabric and baste over the outlines of the
square and circle in a contrasting thread. Make sure you have the grain
running parallel to the sides of the square.

3: Embroider the front of the pincushion as follows, using 6 strands
of thread throughout (except where stated otherwise):

a) Embroider your monogram in the centre of the circle with the caramel thread using stitches and thread thickness appropriate to your choice of letter.

b) Embroider the circle with french knots using the lightest shade of green.

d) Following the embroidery diagram, sew on the eight 8mm shirt buttons with the medium shade of pink embroidery thread.

e) Using 2 strands of the the matching pink sewing thread sew on the four large buttons between the small buttons as follows:

Sew through the button twice
Bring the thread back to the front of the button,
through a sequin,
over the edge of the sequin and through the same button-hole again.

Repeat for the other side of the sequin, using the other button-hole

Bring the thread back to the front of the button and through the sequin,

f) Embroider the three french knots near each corner with the pale pink thread.

g) Embroider the lazy daisy sts in each corner, and the couched threads on each side of the square with the bottle green thread.

h) Finally sew on the remaining buttons with two strands of the red embroidery thread in each corner, so as to form a little “flower”, as follows:

4: Cut out the square, leaving a 1cm seam allowance all round. Cut another square to match, making sure you have the grain of the fabric running parallel to the sides of the square.

6: Fill firmly with stuffing (or stuff firmly with filling…) and sew the opening closed with an invisible stitch.

7: Now take all those lovely coloured pins and stick them in the cushion along the seams, making sure you have the same number on all sides and that they are evenly spaced.